The name Coober Pedy actually comes from an Aboriginal language which when loosely translated means “white man’s hole in the ground” and with a title like that it’s a wonder that more tourists haven’t come around. The fact is the area doesn’t draw many folks in because of its incredibly harsh climate. Less than 2,000 people occupy this town in South Australia but it does have a significant claim to fame…opals! The first opal finding here was made by a teenage boy in 1915 (unreliabl 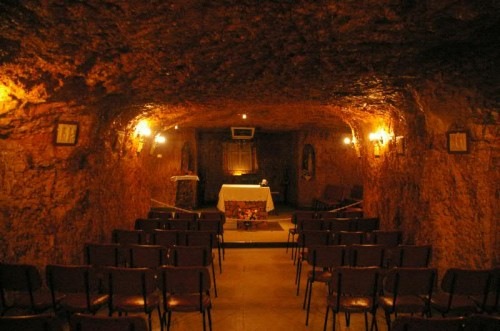 e sources suggest that he immediately redeemed the gem for several porno mags). Nevertheless, Coober Pedy consistently manages to produce million dollar opal finds every few years and can still draw in the get-rich-quick crowd.
Now there may not be too many activities for backpackers exploring the area, but there are some points of interest. Coober Pedy is the true outback mining experience for anyone crazy enough to go. It is the home of over 250,000 mine shafts and if you check out the local homes you’ll find that most of the population lives underground in “dugouts”. You can even stay in a dugout motel for cheap and if you have somewhat of an unholy weekend here (we won’t ask) you can repent at one of the five underground churches. The landscape is quite a sight and has even provided the set to many mediocre movies such as Mad Max III and Red Planet.
As far as shopping and night life is concerned, Coober Pedy leaves its visitors with a few options. You can stop in at the Italo Australian Miner’s Club for a drink and, if you’re lucky, a tale of striking it rich as told by a senile miner. The club also serves delicious steak and schnitzel dinners from Wednesday to Saturday nights. As for local shopping, there are many opal outlets in town, but be warned some are more reputable than others, so be sure to shop around.

Best Places To Visit in Australia During the Ashes 2017 Tour