Fabric xx and Novel will join forces to present one of the most loved names in global dance: Ricardo Villalobos. For twenty years fabric have played an integral role in not just shaping the UK clubbing landscape, but also clubbing culture globally. For their first Australian outing they’ve chosen a highly capable team of ambassadors to celebrate the impact of their clubbing legacy.

Leading the charge is Ricardo Villalobos, who has played a pivotal role in fabric’s journey. In 2007 he compiled a critically acclaimed fabric compilation; annually his quarterly bookings are some of the club’s most memorable and busiest nights, and he has graced many stages at the world’s most significant events and venues. When Villalobos play anything can happen, and whether house, techno, trance or minimal, a universal groove binds his sets earning him international acclaim across his three-decades-long career. The Chilean born artist has become synonymous for not just being the life of the party, but for being the Party.

Joining Villalobos will be a host of fabric regulars, including their longstanding and respected resident Craig Richards, regular guest and fabric techno champion Matthew Jonson, and new fabric resident Bobby. 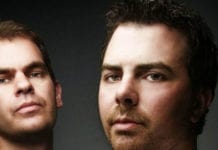 Party On The Top Floor Of Eureka Tower