Reggae-soul band, The Black Seeds, have announced their April six show tour in Australia will begin on April 19.

They are performing at The Big Pineapple Festival on the Sunshine Coast, as well as shows in Melbourne, Sydney, Perth, Coolangatta and Adelaide.

They have made their name through the funk, rock and disco elements combined with the heavy reggae dub jams.

The New Zealand eight piece completed a sold out worldwide club tour and European summer run where they performed to over 50,000 fans at Lowlands and Rock En Seine. 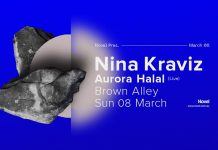