Piknic Électronik’s full summer program in Melbourne has been announced to fill out your plans for one Sunday a month until 29th March 2020. December’s Piknic is headlined by Detroit purveyor Moodymann who will be bringing the classic soul and his own brand of techno and house dance music. Co-headlining will be Mr. G and his analogue bass-heavy electronic tech-funk while Detroit DJ, John Jammin’ Collins, will be adding his four-on-the-floor rhythm for Chicago house and Detroit techno.

Melbourne favourite, Nastia, headlines January’s Piknic and she’s arguably one of the biggest current names on the international techno circuit with her infectious aura and groove. In her own words: “My aim is to see as many people as possible on the dancefloor and to dance with them, leading the mood with what unites us all -music. I am what I do.” Another Australian favourite is Laura King who will support with a raved-up set that combines techno, trance and hard house, not to be missed. Keeping it local are the Melbourne duo, Interstellar Fugitives aka Sarah and Georgia Bird, who are heavily influenced by 90’s rave and jungle, futuristic electro sounds and breakbeat.

As a traditional treat for February’s Piknic, Melbourne friends Thick as Thieves will once again co-present their own curated line-up, this time featuring the popular Cologne duo Andhim who will bring their own definition of ‘Super House’. The line-up also includes Melbourne favourite Boogs back at the Piknic stage for the fourth consecutive year along with the Irishman Brian Fantana and his dark, bass-heavy and emotional sound then completed by BINI. Acts are yet to be confirmed for their big finale party in March yet expect some big surprises.

Moodymann – I Can’t Kick This Feeling When It Hits 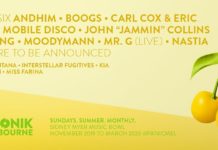