Revolver, better known as Revs, will take you in on a Friday evening and treat you to a bit of soul-tinged deep house and then spit you out onto Chapel Street Sunday morning, ears still ringing with throbbing techno.

When beloved Melbourne club Lounge closed in 2018, it sent tear-streaked eyeliner running and club kids scurrying to find a new space for an all-night boogie. Lounge had operated on the site for 29 continuous years, which is longer than many of its patrons had been alive.

Music is front and centre here, with a collection of records pumping out of Funktion One speakers specifically installed to fill the room. you can head upstairs to the 80-room black box venue and party to events put on by Animals Dancing, Crown Ruler, Cool Room and Pelvis. It’s super dark in the room, with a singular light that projects onto a disco ball that casts an eclipse shadow above the DJ booth.

This Collingwood bluestone stalwart is known for its revolving roster of bands and live acts, but it also hosts a range of club nights. Downstairs Gaso is a summertime haven, particularly when the retractable roof is open and everyone is dancing with a Spritz in hand.

Sub Club is a basement nightclub in little-known laneway Flinders Court, and its programming is as underground as its location. The club is carved out of the old ANZ bank vault, which gives it that Tresor vibe. Line-ups reflect forward-thinking curators and subcultures, so no one is left out here.

Pony wasn’t just a nightclub. It was the nightclub. The last port of call. The boozy dance pit from hell. The one-word explanation for showing up to brunch in someone else’s pants, shirt, shoes. Et cetera.

Geddes Ballroom presents a blend of live music and DJs, smack bang in the middle of the CBD. The venue itself is a three-tier 170-year-old bluestone building and, this place has some interesting decor. It feels sleazy but in a good way: red draping curtains, poles and a catwalk – yes, this place used to a strip club.

The vibe is electric in this darkly red-lit boudoir of a band venue and it’s not hard to fathom why. The Night Cat has become a bit of a Fitzroy institution, with live jazz, funk and reggae among its diverse line-up.

The Toff in Town

Curtin House is frankly ridiculous, brimming over as it is with a host of outstanding bars and club spaces. The Toff in Town is one of the swankiest joints in the building. Climb the stairs and you’ll find a private booth bar to the left and the excellent band space to the right. 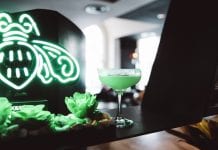